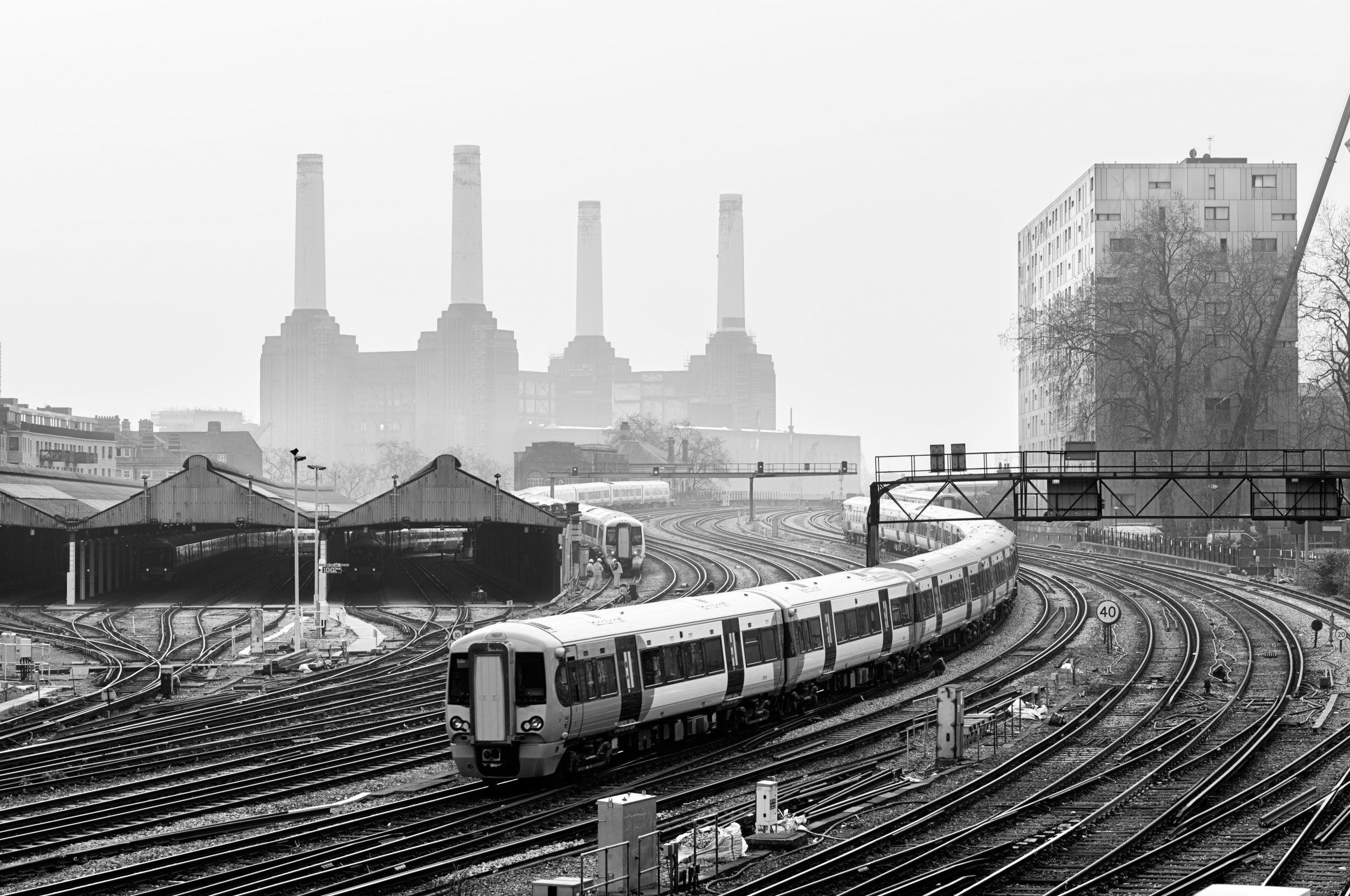 The consequences of the zero and negative interest rate policy must be discussed more intensively. In addition to the economic consequences, the social consequences must also be taken into account, as these often weigh even more heavily in the long term.

Anyone who has ever been to Japan knows: Japan is special. The country has many strange habits. The Japanese culture is simply different and many peculiarities are hardly understood in the West.

But not only old-established traditions are foreign to us Westerners. Just as disturbing are social developments such as the increasing tendency of Japanese people to overwork, parasite singles who isolate themselves, or the existence of platonic relationships in which Japanese people are paid to hold hands. All of these phenomena are indeed odd and are generally attributed to the peculiar Japanese culture.

However, few people are aware that there is probably a deeper reason for these curiosities, namely an economic one: zero and negative interest. We will take a closer look at their economic consequences in a forthcoming webinar. Here and now, this article will focus on the social impact of negative interest rates.

What you see and what you do not see

Generally speaking, Japan is still considered not to be greatly affected by its decades-long zero-interest policy. As we discussed in our webinar with Professor Gunther Schnabl on Japanisation in Europe, by taking a closer look, one does indeed see deteriorating phenomena in Japan.

Certainly, the land of the rising sun is still a rich country today. However, as the French economist Frederic Bastiat already knew: For an overall assessment, it is not only what you see but also what you do not see that is relevant. So the question is, where would Japan be today without zero interest rates?

In fact, Japan has lost one thing above all in recent decades: Economic power and economic culture. The latter has not so much been lost as it has changed dramatically. In the 1960s to 1980s, Japan caught up economically with the Western world. The economic growth of this period was to go down in the history books as Japan’s post-war economic miracle.

During this phase, Japanese companies, in particular, became increasingly feared international competitors. They knew how to take over key technologies from abroad, improve them continuously, and conquer international market share step by step.

Due to this work philosophy of continuous improvement, known in Japanese as Kaizen, companies such as Sony, Panasonic, Toyota, or Mitsubishi were soon feared worldwide. While it was previously the Japanese companies that copied the West, the West soon felt the need to emulate Japanese companies, given the innovative creativity that these large companies displayed. 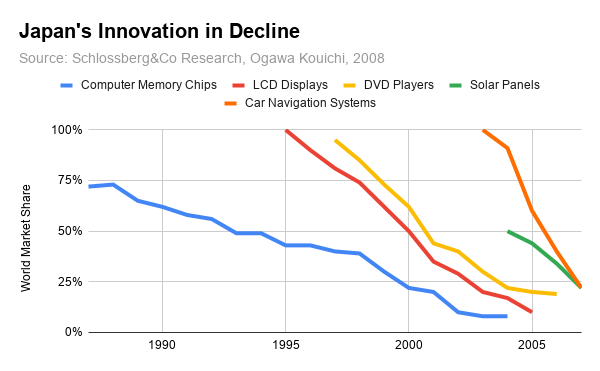 But then, all of a sudden, things turned out differently, to the worse for Japan. At the beginning of the 1990s, interest rate policy in Japan increasingly moved towards the zero lower bound. Three decades later, the country is still stuck in a zero interest rate trap and the magic and innovative power of Japanese companies has diminished considerably. In international comparison, they can hardly keep up with American or Chinese counterparts, or at least they are no longer as feared as they used to be.

Innovation ultimately has a lot to do with time preference in economic terms. Real innovations often only pay off years later, which is why innovative companies have to be prepared for a long haul. Zero-interest rates counteract the power of innovation because they almost always go hand in hand with higher time preference. The fact that Japanese companies are hardly feared by global competition today is probably largely due, albeit not monocausally, to Japan’s long-standing zero interest rates.

Today, people generally speak of the lost decades that Japanese companies have fallen victim to. The opportunity costs of this zero interest rate policy are also reflected in the dwindling innovative strength and productivity. It is hard to imagine where Japan would be today if the Japanese economy had been spared the burden of zero and negative interest rates.

Instead, Japan’s “innovations” seem to be located in consumer-oriented, rather bizarre fields today. The platonic relationship offers are only one “invention”. Today Japan is also a pioneer in dolls, which are mainly used by Japanese men as sex dolls, but also as relationship substitutes. Also, an “emerging” market can be found in Japan when renting a substitute father or friend. If you do not want to go out alone, you can rent a companion in Japan. Or you can rent a whole family to be able to fake enough visitors at our personal graduation party.

Such “market offers” are ultimately an expression of the current market situation, which in Japan has been geared towards consumption and short-termism for decades due to zero interest rates. It is only logical that entrepreneurs adjust their offers accordingly. This consumer-oriented “instant attitude” is also reflected in the large number of vending machines that exist in Japan. Today, the country has the highest density of these devices; there is one vending machine for every 23 people.

The zero and negative interest rates have not only paralyzed the innovative power of Japanese companies but in the same breath, they have also affected the working population. In reference to the lost decades, one also speaks of Japan’s lost generation.

Younger people in particular have been hit the hardest. As recently as 1992, 80 percent of young Japanese workers had a regular job. In 2006, half of all young workers were in part-time jobs with lower wage levels. Only two percent of non-regular workers in Japan move to regular work each year. Most of today’s young workers are unlikely to find a regular job, many expect. Haken is the term used in Japan for these part-time jobs. 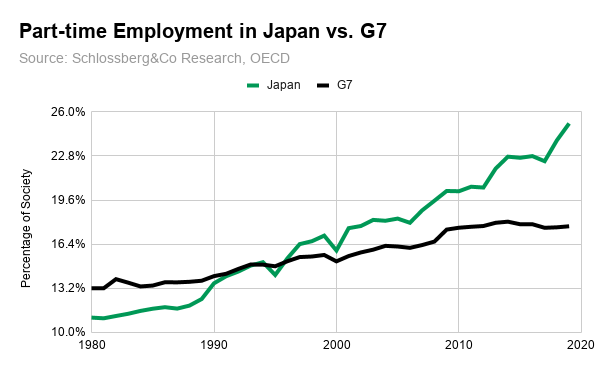 Quite a few young people have therefore completely cut themselves off from the world of work, an inglorious trend known in Japan under another popular term called Hikikomori. At the same time, people are withdrawing more and more from civil society and the public sphere into their own four walls. Unofficial speculations suggest that this phenomenon described as cocooning now affects up to 10 million Japanese.

So while some Japanese are retreating, others are working themselves to death. According to the OECD, Japanese workers sleep less than their colleagues in other Western economies, averaging 442 minutes per 24 hours. In the USA, for example, this average is 528 minutes.

A sad example was set by the young Japanese woman Matsuri Takahashi, who took her own life at the age of 24 and worked well over 100 hours a week for months before her death. She thus became the face of this phenomenon known as Karoshi. 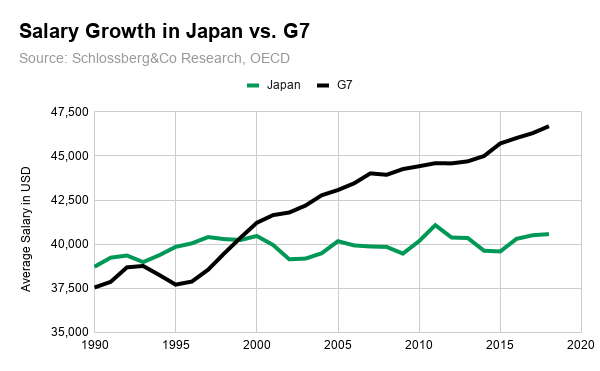 Here in the West all of these phenomena, above all Karoshi, are justifiably met with great incomprehension. Nobody really wants to or cannot understand that in Japan no one would really do anything against this. But again, people here in the western world generally forgets that these problems have just the deeper root described in this article.

Zero and negative interest rates are a reality in Europe and soon in the US as well. It is not necessarily to be expected that we will be immune to similar developments as Japan. In the West, the first “signs of resignation” are beginning to appear, particularly among millennials and younger generations. A growing proportion of them seems to be subconsciously realizing that they have to adjust to an increasingly stagnant life.

The anger and frustration are then directed either at the condemned turbo-capitalism, against which more and more people take to the streets in several demonstrations. Or people give themselves over to various new forms of nihilism, such as the “Tide Pod Challenge“, popular a few years ago. This consisted of swallowing detergent pods and resulted in a few dead lives, at least in the US.

If these are not warning signs, what is? Strange trends are happening in Japan, and they are about to increasingly happen in Europe and the US. As a matter of fact, these consequences of the zero and negative interest rate policy of today would have to be discussed more intensively, or else the growing hatred of people is directed to the wrong culprits. In addition to the economic consequences, the social consequences must be taken into account, as these often weigh even more heavily in the long term.