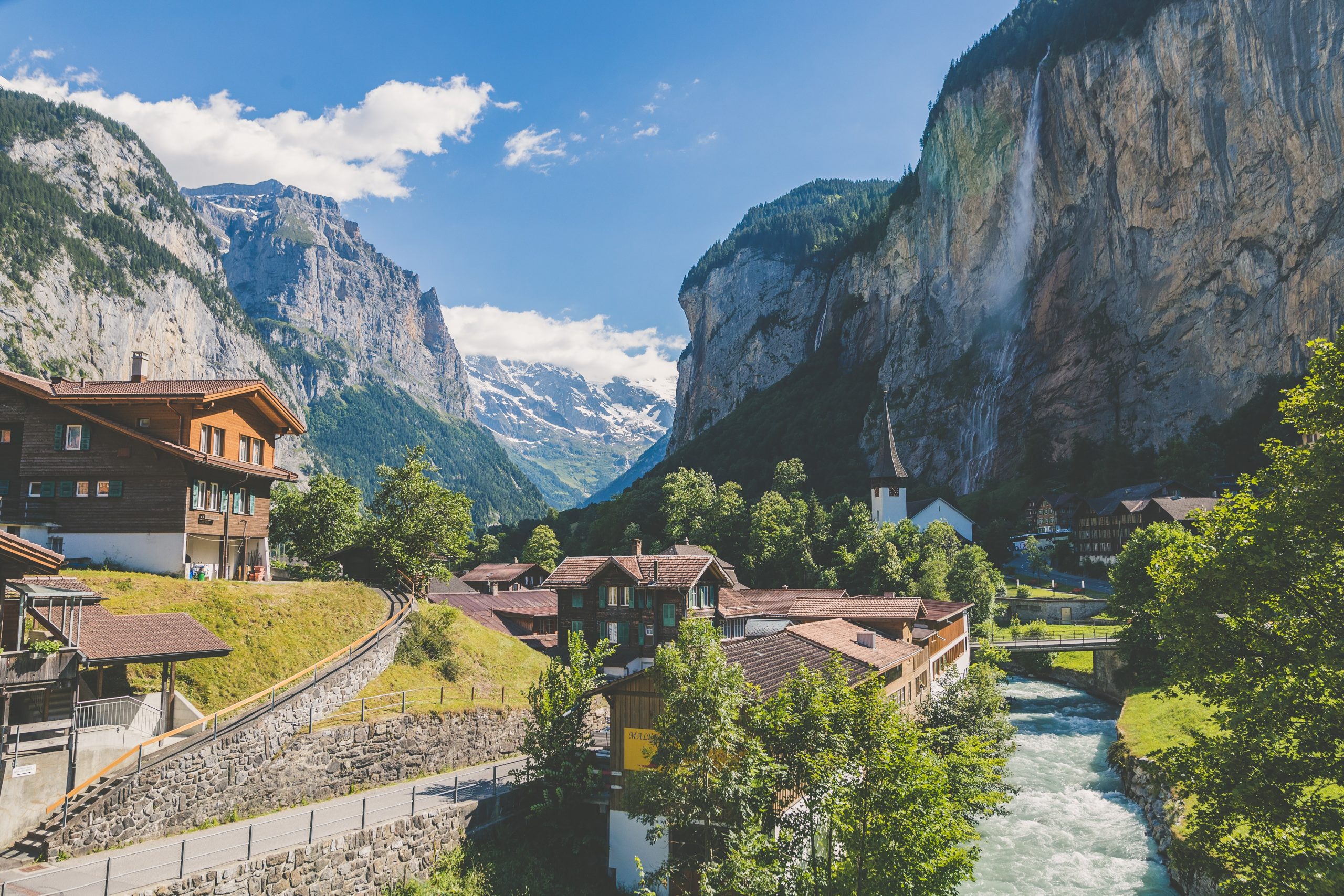 A comparison of Switzerland and Japan. Two countries that have both been grappling with negative interest rates for quite some time now.

Ever since the Corona crisis, more and more financial commentators have been talking about the Japanification of Europe. Among many people, the expectation is that this latest event will foster stagflation in Europe. More debt (especially government debt), increased pressure on real wages, and falling productivity; all of this will increasingly have to be taken into account.

In reference to the land of the rising sun, this future prospect is described as Japanification. This term has originated because of the economically sluggish development Japan has been experiencing for several decades now. Japan’s sun seems to have stopped rising and has rather faltered. 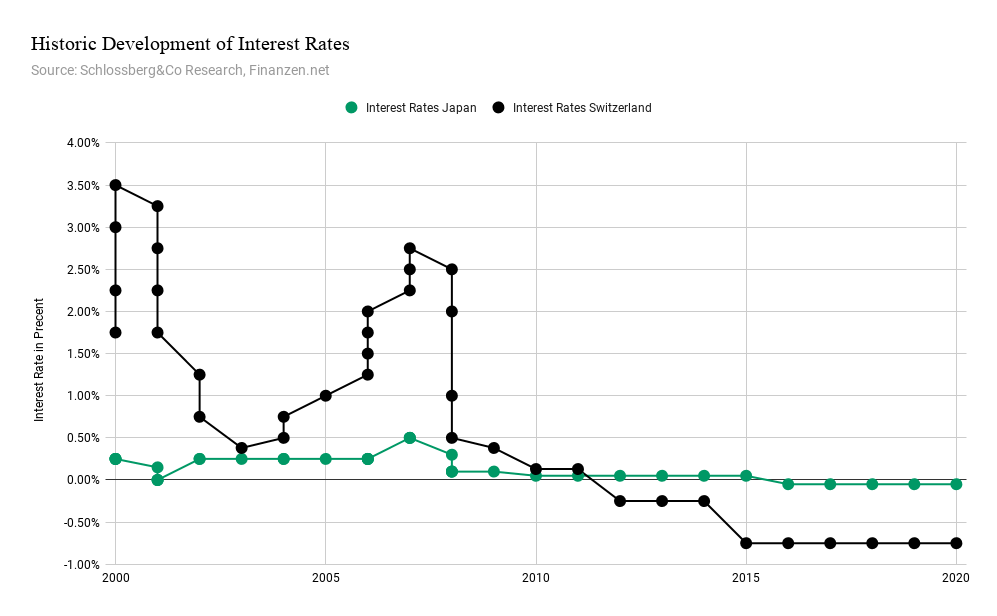 In the 1980s, the Japanese yen appreciated very strongly in the wake of the Plaza Agreement. Japan’s strong export economy was plunged into a crisis which the Japanese central bank tried to combat with an expansive monetary policy. However, this very endeavor fueled a credit bubble which then burst towards the end of the decade. Since then, Japan has been in this so-called phase of stagflation. Interest rates in Japan have been close to zero for several decades. Credit and thus economic growth are making only slow progress; in fact, the country of the Samurai is now struggling against persistent deflationary tendencies.

Is Switzerland on a par with Japan?

In terms of stagflation, Japan seems to be 15 years ahead of Europe, so to speak. Interestingly, at a similar time in the 1990s, a bubble also burst in Switzerland, the real estate bubble. In contrast to Japan, however, Switzerland still had its interest rates at a high of 3.5 percent at the turn of the millennium, while key interest rates in Japan had already reached the lows of 0.25 percent.

As a reaction to the bursting real estate bubble, the Swiss National Bank lowered its interest rates to below 0.5 percent within three years, thus marching in lockstep with other Western central banks, most notably the US Federal Reserve. These interest rate cuts laid the foundations, in fact, they created the monetary distortions that manifested themselves in the financial crisis of 2008. As a consequence of this “Great Recession”, interest rates in Switzerland, too, were permanently pushed near the lower bound of zero. Negative interest rates became a reality in this country for the first time in 2012, and then in 2015, after the minimum exchange rate peg against the euro was lifted, they were reduced to a globally unique -0.75 percent. 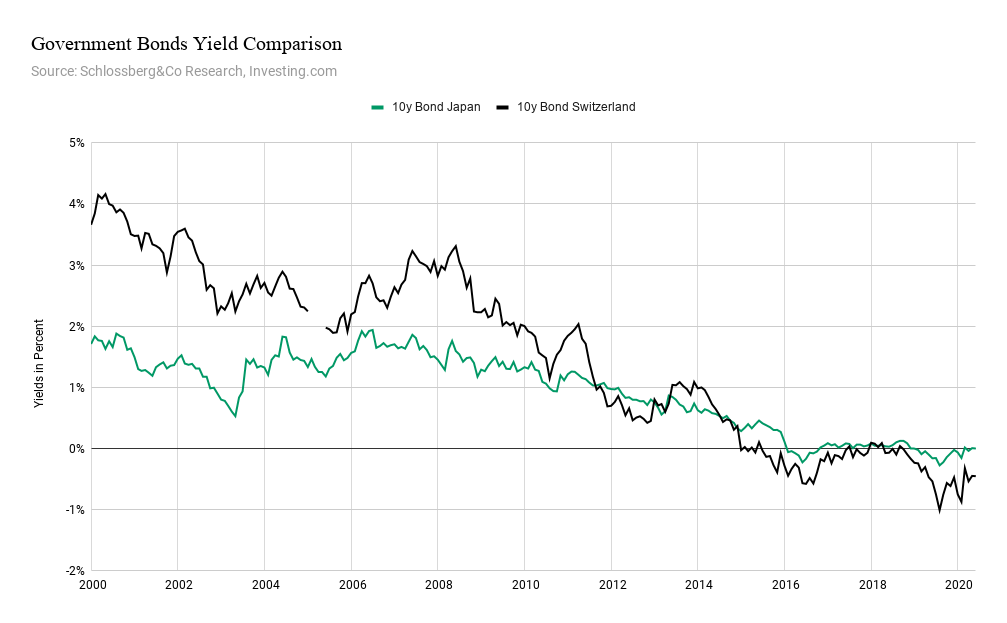 The Swiss banks are indeed suffering greatly from low negative interest rates. In 2018, the finance and insurance sector contributed CHF 62.8 billion, or 9.1 percent of Switzerland’s GDP. A decade earlier, at 66.7 billion, the figure was still at 11.1 percent. From an economic point of view, negative interest rates also have a capital-destroying effect, which in turn should accelerate deflationary tendencies.

In fact, Switzerland has had to contend with slightly deflationary pressures from time to time in recent years. What must not be forgotten though: Negative interest rates also lead to a real redistribution of funds from the private sector to government. If the latter is active in the economy (mainly as a consumer), negative consequences of low negative interest rates can be concealed. And this is precisely what a study by economiesuisse seems to confirm: According to the findings, public administration has grown much faster in recent years than both the private sector and abroad.

The fact that the Swiss franc continues to serve as a safe haven should also have a compensatory effect. Such an inflow of capital, which causes the currency to appreciate in this country and drives its central bank to intervene on the currency market, brings financial resources into the country which counteract the negative consequences of negative interest rates. Ultimately, the SNB justifies the negative interest rates as a downstream reaction to the capital inflows into Switzerland. In this regard, Japan should also benefit from the fact that the Yen is used as a refuge currency in many Southeast Asian countries.

Exotics among the central banks

But in the end, it cannot be overlooked: Stagflation and negative interest rates, whether in Japan or Switzerland, they are blooming strangely. The Japanese central bank now holds more and more government bonds on its books. As recently as 2008, it owned just over five percent of all outstanding Japanese government bonds. In 2020, this figure stands at almost 48 percent. So it won’t be long before the magic limit of 50 percent is broken. 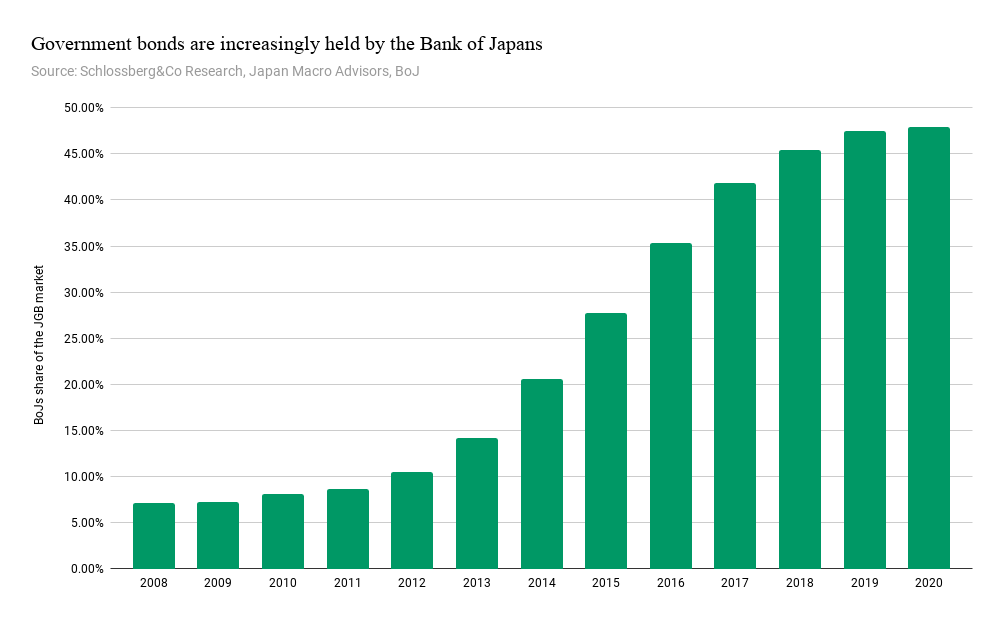 No less impressive is the percentage of Japanese equity ETFs (Exchange Traded Funds) that the central bank now owns. At the end of March, holdings amounted to 28.9 trillion yen (around USD 266 billion), which represents almost 80 percent of the total Japanese ETF equity market. The Bank of Japan is thus well on the way to soon replacing Japan’s government pension investment fund, the largest in the world, as the leading holder of shares listed in Tokyo.

The Swiss National Bank also buys shares diligently. In the style of a hedge fund, the SNB has invested heavily in US equities in recent years and now holds a portfolio worth over USD 90 billion. In particular, the SNB holds a steadily increasing share in major tech giants such as Apple, Facebook, and Google.

Even if the devil is in the details and economic situations of individual countries can hardly be compared in a stereotypical way, Japanification is likely to have long since arrived in Switzerland. To a certain extent, Switzerland, bein some kind of modern Gallic village, is still doing better than the rest of Europe. But the prospects are not unclouded because of this. Even the one-eyed king among the blind can go blind in one eye if he thinks he deems himself too seeing. It is a fact that in Switzerland, too, the general population must be invested in financial markets (as the SNB demonstrates) in order to escape the creeping monetary socialism of our day and age. 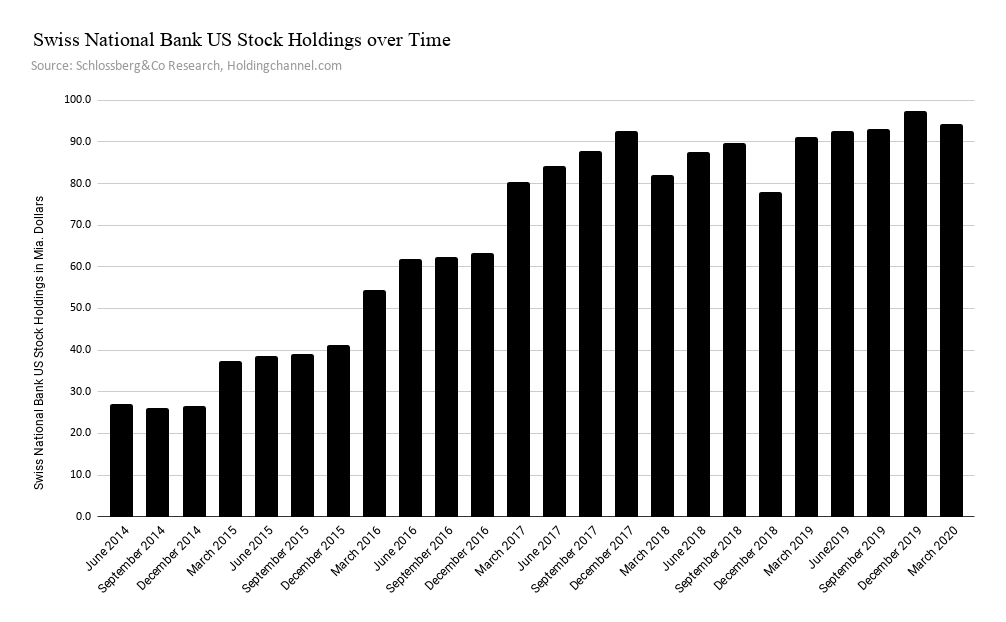